The surge by the world’s largest petrochemical and oil companies into plastic recycling as an industry “plan B” is in question, after a historic UN agreement to negotiate a legally binding treaty to tackle plastic pollution.

Despite extensive lobbying efforts to narrow the proposal to deal with plastic waste management, the treaty signed by 175 countries could place equal onus on plastic makers to limit their production.

By 2050, petrochemical production will account for nearly half of growth in global oil demand, according to estimates by the International Energy Agency.

The industry needs solutions to plastic pollution that do not require it to scale back this production, as the world grapples with it’s reliance on oil and gas.

A growth area it had alighted on was chemical or “advanced” recycling, technology that turns plastic waste back into raw materials, or oils and gases, that are then fed back into petrochemical production.

Less than 10 per cent of the near 370mn tonnes of plastic produced annually is recyclable. Yet the demand for recycled plastic is surging as consumer goods companies come under pressure to reduce their environmental impact.

The world’s largest petrochemical companies, including Dow, Sabic and Chevron Phillips Chemical, have all formed partnerships with recycling start-ups.

In China, Zhejiang Petrochemical is putting almost $29bn into an integrated facility to produce both fuels and plastics from the same complex, with backing from oil major Saudi Aramco. Shell and ExxonMobil are also building their own units to upgrade plastic waste.

European plastic producers are expected to increase their investment in chemical recycling from an estimated €2.6bn to €7.2bn between 2025 and 2030, according to industry body Plastics Europe.

In the US, the American Chemistry Council reports that more than $7.5bn in investments in advanced recycling projects have been announced since 2017, with more to come.

Unlike the existing “chop and wash” mechanical recycling method, the most common form of chemical recycling is pyrolysis, which uses intense heat to break down hard-to-recycle plastics such as polyolefins. These are found in cling film, bottle caps, liquid containers and many other forms of household packaging. 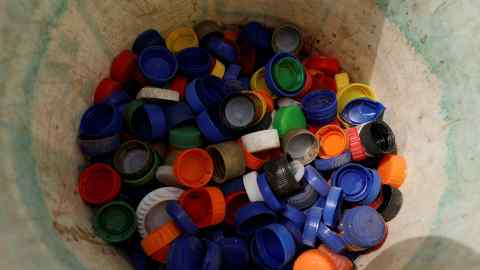 While the industry markets this technology as a better alternative to traditional plastic recycling methods, scientists have concluded that pyrolysis is considerably more energy intensive.

Germany’s BASF, the world’s largest chemicals group, uses the process and has found that the pyrolysis of polyethylene plastic produces 3.34kg of carbon dioxide per kilogramme, the equivalent to burning a litre of home heating oil.

Putting the same amount of plastic into landfill emits 0.06kg by comparison, although that does not address the intractable problem of the waste in soils and waterways.

The Natural Resources Defense Council (NRDC) this month published findings that the majority of chemical recycling facilities in the US release dangerous amounts of hazardous pollutants into communities and the environment.

“The energy required to do reprocessing is higher than the energy required to make the [plastic] in the first place,” he said. To limit carbon emissions in line with the global warming goals of the Paris climate accord, it would be better to “bury the stuff”, according to Hallett.

Despite the rise in investment, the chemical plastic recycling sector is still some way from reaching commercial scale, according to industry analysts.

Projects need a processing capacity of about 100,000 metric tonnes to make economic sense; at present it is at one-tenth of that level, according to data group IHS Markit. It would take until “well past 2030” to become significant, said Anthony Palmer, vice-president of chemical consulting at IHS.

Proponents argue that in time the industry will usefully expand. “If scaled in a safe and circular way, these technologies can help to add value to materials that currently have such a low value that it’s not even worth selecting, sorting or processing,” said Kate Daly, managing director of investment firm Closed Loop Partners and head of its Center for the Circular Economy.

Plastic Energy, a UK-based chemical recycling company that is a partner of oil groups Total Energies, ExxonMobil and Sabic, is one of the few operators with commercially active plants.

It uses pyrolysis to create patented liquid oil to sell to the petrochemical industry. The business secured €145mn last November from investors to build more plants.

“You cannot look only at energy consumption,” said Carlos Monreal, Plastic Energy’s ​​chief executive. “We are producing a product that has a much bigger value and can be recycled as many times as you want into virgin-quality plastic.”

Pyrolysis is dominant but it is not the only chemical recycling method. French technology company Carbios uses an enzyme to trigger a process that breaks down PET, which is commonly used to make plastic bottles and polyester. It is particularly focused on mixed plastics and polyester fibres favoured by fast-fashion brands that are impossible to recycle mechanically.

Not all companies are committed to ensuring their materials will be used to make plastics again. Out of the 75 chemical recycling companies reviewed by Closed Loop Partners, fewer than 30 produce raw materials for that purpose.

These companies may not be able to categorise themselves as recyclers for long. The Association of Plastic Recyclers, an international trade body, has called for the definition of chemical recycling to be limited to processes that result in waste being turned into new plastics, rather than more oils and gases.

Last September, the US Environmental Protection Agency announced it was considering how pyrolysis and gasification facilities could be regulated under the Clean Air Act.

Judith Enck, president of non-profit group Beyond Plastics and a former EPA regional administrator, said the agency would have no choice but to regulate chemical recycling facilities as incinerators “because that’s what they are”.

“The industry does not want to reduce their production of plastics so they need to buy themselves some time,” she said.

“I’m a little surprised that the chemical industry is putting all their eggs in this basket,” Enck added. “Because it’s a very wobbly basket.”

Are you curious about the FT’s environmental sustainability commitments? Find out more about our science-based targets here