Speaking to a group of US chief executives this week, Joe Biden hinted at the main message he will deliver to western leaders at Nato headquarters on Thursday at the start of a three-day visit to Europe.

“Now is a time when things are shifting,” Biden said. “There’s going to be a new world order out there, and we’ve got to lead it. And we’ve got to unite the rest of the free world in doing it,” he added.

The president’s words reflected the fact that, after he helped to corral a cohesive response to Russia’s invasion of Ukraine last month, he is now having to adapt to a more protracted and possibly more dangerous phase of the conflict, in which maintaining that unity could be even more difficult.

With Russian forces escalating their attacks on civilians, and fears that Vladimir Putin might resort to weapons of mass destruction to break Ukraine’s resistance, Biden and European leaders face more difficult choices about their next steps. Among them are what kind of additional sanctions to impose on Moscow; how far to go in delivering military aid to Kyiv; how much to beef up defences on the eastern flank of the alliance; and how to deal with countries such as China that are sympathetic to Russia.

Speaking to reporters on Tuesday Jake Sullivan, Biden’s national security adviser, said even the “very weighty matter” of the potential use of nuclear weapons by Russia would have to be on the table at Nato.

“We will be consulting with allies and partners on that potential contingency, among a range of others, and discussing what our potential responses are,” Sullivan added.

Nato is set to agree to provide Ukraine with “additional support including cyber security equipment”, and supplies to “protect against chemical, biological, radiological and nuclear threats”, secretary-general Jens Stoltenberg said on Wednesday.

The alliance will also agree to set up four battle groups of Nato troops in Bulgaria, Hungary, Slovakia and Romania, joining deployments aimed at deterring potential Russian aggression in Poland and the three Baltic states.

“We must reset our defence and deterrence for the longer term,” Stoltenberg said, adding that Nato leaders would “agree to strengthen Nato’s posture in all domains”.

For Biden and his top officials, the trip is a chance to boost confidence in America’s ability and willingness to protect Europe’s security and its democracies in the face of Moscow’s threats.

Biden will extend his trip into Poland on Friday and Saturday, where the White House said he would deliver a speech “on the united efforts of the free world to support the people of Ukraine, hold Russia accountable for its brutal war, and defend a future that is rooted in democratic principles”. Whether it turns into a 21st-century equivalent of other hugely symbolic American presidential visits to Europe — such as the cold war-era stops in West Berlin by John F Kennedy and Ronald Reagan — remains to be seen.

“Biden has a deep sense of the hinge moment we are in. I think he understands the need to get it right for future generations,” said Chris Murphy, the Democratic senator from Connecticut and a member of the Senate foreign relations committee. But Murphy also cautioned that Putin was “in a corner and increasingly making bad decisions” and Biden would need to “prepare for” scenarios of expanding conflict including a direct attack on Poland.

In the run-up to the summit, top US officials said the west would on Thursday impose new, co-ordinated sanctions on Russia, on top of the measures targeting the country’s central bank, key financial institutions, top officials and oligarchs.

But the scope of new measures may be limited. Both US and EU officials have indicated that a focus of the summit will be to strengthen the enforcement and effectiveness of existing sanctions. 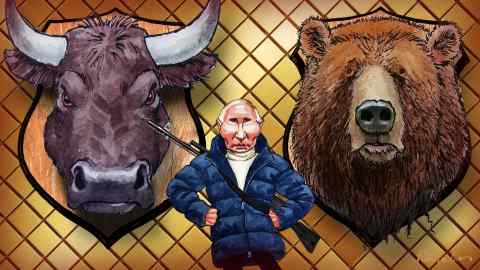 Some EU member states have called for Europe to join the US ban on Russian energy imports. But this is politically sensitive because of the continent’s higher dependence on Russian energy. Multiple European leaders have warned against energy sanctions, preferring instead to focus on how quickly the EU can wean itself off Russian imports by finding alternative suppliers and fuels.

Alexander De Croo, Belgium’s prime minister, told the Financial Times on Wednesday that imposing sanctions on Russian energy exports would see the EU “fight a war on ourselves — that is not the goal”. And German chancellor Olaf Scholz told the Bundestag on Wednesday that immediately cutting imports of Russian energy supplies would “mean plunging our country and the whole of Europe into a recession”.

Max Bergmann, a senior fellow at the Center for American Progress, a left-leaning think-tank in Washington, said: “You always want to have additional steps you can take but I think we’re at the stage of wanting to assess the sanctions that we put in place and their impact not simply on Russia, which we see as severe, but on the broader global economy — so that we don’t want to cause a global economic crisis.”

Sullivan said the US would not be putting pressure on the EU to join the Russian energy ban, stressing that Biden would instead announce “joint action” to help Europe reduce its dependence on Russian energy — and would seek to co-ordinate any response to China’s possible “participation” in the conflict. “We believe we’re very much on the same page with our European partners, and we will be speaking with one voice on this issue,” he said.

During his appearances at both the Nato and EU summits, Biden may press European leaders on longer-term plans. They include the need for more defence spending to match Nato target, which have become even more important given the war in Ukraine, and separate proposals for the bloc to use more of its fiscal firepower on security and energy.

But the overarching goal of keeping western allies on board with helping Ukraine and responding to Putin’s military actions and threats will be Biden’s most pressing challenge.

“This is not a moment when Biden needs to scramble — he has already done an extraordinary job to keep us highly co-ordinated with the Europeans,” said Murphy. “This is going to be a constantly evolving process: managing a war, it’s [a] messy business.”

Starbucks, Microsoft and Amazon are three of a number of companies...

Who wrote the note atop Queen Elizabeth’s coffin and what did...