The White House has signalled that the US and its European allies intend to escalate sanctions on Russia this week as it warned the conflict in Ukraine would “not end easily or rapidly”.

“[President Joe Biden] will join our partners in imposing further sanctions on Russia and tightening the existing sanctions to crack down on evasion and ensure robust enforcement,” said Jake Sullivan, US national security adviser, during a press conference on Tuesday.

Sullivan declined to provide details of the sanctions but said Biden would announce the measures during his visit to Europe, which begins in Brussels on Wednesday. The president is scheduled to meet with Nato partners and attend European Council and G7 summits.

“This war will not end easily or rapidly,” said Sullivan, adding that Biden’s trip will aim to ensure European allies continue to be united by sending “a powerful message that we are prepared and committed to this for as long as it takes”. 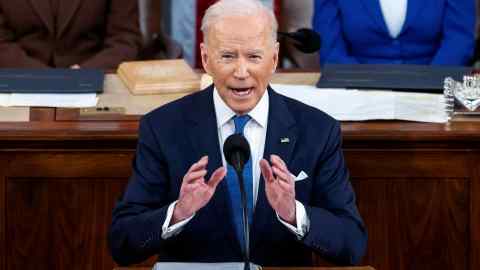 The president will discuss longer-term adjustments to Nato’s presence in Europe’s eastern flank as well as joint actions on enhancing the region’s energy security and reducing its dependence on Russian gas.

He will also travel to Poland, where he will meet with troops who are deployed there to protect Nato territory, as well as experts involved in the humanitarian response, Sullivan said. The US will also announce more assistance for refugees fleeing the fighting in Ukraine, he added.

As Russia’s war with Ukraine enters its fourth week, Washington is pushing to crack down on sanctions evasion and stamp out attempts by countries to weaken or circumvent the measures already in place.

“We have applied an enormous amount of economic pressure and in order to sustain and escalate that pressure over time . . . a big part of it is about effective enforcement,” Sullivan said.

He added that Russia’s invasion has driven the US and Europe closer together rather than dividing them, and predicted that Russia would be unable to fully “subjugate” Ukraine as the war grinds on.

“Although Russia may take more territory in these brutal military operations, it will never take the country,” Sullivan said.

The White House also announced that Biden’s press secretary Jen Psaki would no longer be travelling to Europe with the president after testing positive for Covid-19 on Tuesday.

Psaki and Biden had two meetings on Monday, which she described on Twitter as “socially-distanced”, adding that the president is not considered a close contact. This is her second positive test in five months.

US urges China to be transparent about growing Covid outbreak

Sunak to keep part of windfall cash despite appeals to cushion...