The US has agreed to ease steep tariffs on UK steel and aluminium products as the countries attempt to resolve a Trump-era trade dispute and bolster transatlantic relations.

The suspension, which will also see the UK lift its retaliatory tariffs on US bourbon, agricultural and other goods, will go into effect on June 1.

The deal states that any UK steel company owned by a Chinese entity must undertake an audit of its financial records to “assess influence from the People’s Republic of China”. The results will be shared with the US.

Donald Trump’s administration imposed tariffs on a range of countries in 2018 on the grounds that cheap foreign metal imports posed a threat to national security.

Anne-Marie Trevelyan, the UK’s international trade secretary, said the move was “good news” for the British industries that had been “unfairly” hit with duties by the US. “It means our manufacturers can now enjoy a high level of tariff-free access to the US market once again.”

Gina Raimondo, US Commerce Secretary, said President Joe Biden had made it a “top priority” to “counter China’s unfair trade practices and ensure that America is able to compete globally in the 21st century”.

The Biden administration has already struck similar deals with the EU and Japan, although it only began talks with the UK on lifting the tariffs in January. 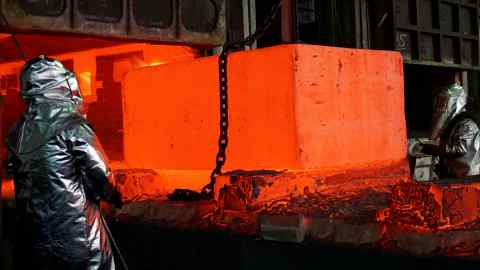 In December, the Financial Times reported that the US was delaying the talks because of concerns over the UK’s threats to change post-Brexit trading rules in Northern Ireland.

Washington believed repeated threats by Brexit minister Lord David Frost to suspend the Northern Ireland protocol, which ensures there is no trade border on the island of Ireland, compromised the Good Friday Agreement of 1998, which brought peace to the region.

Frost resigned just before Christmas and Liz Truss, the foreign secretary now in charge of talks, has taken a more conciliatory tone.

The announcement follows a visit by Trevelyan to Baltimore and Washington this week, where she met with Katherine Tai, US trade representative, and Raimondo.

In a press conference held earlier on Tuesday to mark the end of the two-day “trade dialogue”, Tai said the two sides had also discussed how best to respond to new shocks to the global economic system, such as Covid-19 and the war in Ukraine.

When asked if the new dialogue set up by the UK and US would lead to the continuation of the stalled free trade agreement talks, Tai said she did “not want to prejudge, predetermine or prescript where these dialogues might take us”.

But she added that a free trade agreement was “a very 20th-century tool” which “has its place . . . in the toolbox”.

“What I would like to do is to ensure that the conversations and the approaches that we bring today . . . are maximally responsive and that we don’t spend years and spend a lot of blood, sweat and tears working on something that isn’t going to be relevant to the needs of our people in our economy,” Tai said.

admin - January 28, 2023
0
In three cases last term, the constitutional concepts of history and tradition played important roles in the reasoning of the Supreme Court. Dobbs...