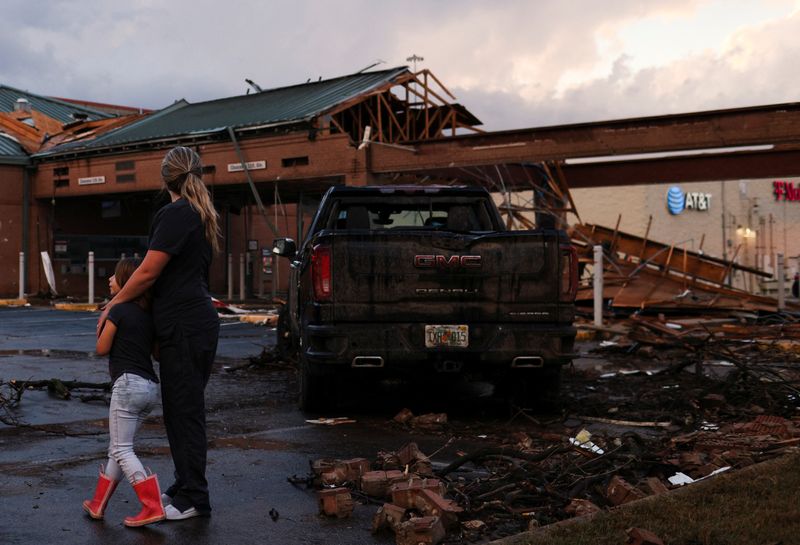 © Reuters. People survey the damage to a shopping center after a tornado in a widespread storm system touched down in Round Rock, Texas, U.S., March 21, 2022. REUTERS/Tamir Kalifa

(Reuters) – At least two tornadoes tore through north and central Texas on Monday, destroying homes and businesses, knocking out power and injuring at least several people.

Multiple homes were damaged or left in ruins in Round Rock, Texas, a city of around 120,000 people about 20 miles from Austin, after a tornado touched down there, officials said.

Banks said buildings in and around the city had suffered “extreme structural damage” but that only minor injuries had been reported. The twister also caused a gas leak that was subsequently stopped, he said.

A family of three people was rescued from the rubble of their home in the town of Bowie, Texas, roughly 90 miles northwest of Dallas, after a tornado touched down there, the local NBC affiliate reported. One woman was hospitalized.

Multiple other structures were damaged in and around Bowie, NBC 5 reported, including a gas plant off Highway 59 south of the city. There were no immediate reports of fires or leaks from the plant.

A high school in Jacksboro, some 35 miles southeast of Bowie, was also hit by a possible tornado, according to the station. The roof of the school’s gym collapsed but no students were reported hurt.

The National Weather Service warned that the storm system that spawned the twisters could bring strong winds, hail and the potential for more tornadoes in Texas and Oklahoma on Tuesday.

The system also carried the danger of flooding in southern states, including Lousiana and Mississippi,the weather service said.

Tom Lee Says Bitcoin is Still A good Investment, But Why?

admin - November 28, 2022
0
Bitcoin has been declining since the advent of the bear market. But the bearish trend escalated in the past three weeks due to...

OpenSea lets go off roughly 20% of its team, CEO says