P&O Ferries has revealed it offered payouts of as much as £170,000 to the crew members it sacked without notice last week, as the company tries to repair its reputation following a barrage of criticism over its treatment of staff.

P&O on Tuesday announced it had set aside £36.5mn to cover redundancy payouts to the UK-based crew it dismissed in order to cut costs by replacing them with cheaper agency staff.

The company said it was in discussions with 575 of the 786 affected seafarers, with payouts linked to their period of service.

Staff have been offered 2.5 weeks’ salary for each year employed as well as “up to” 13 weeks salary to compensate them for the lack of notice, and another 13 weeks on top of this to make up for the lack of consultation period.

P&O only gave staff two weeks to decide whether to accept the payouts, and union bosses have said the severance agreements included a ban on talking to the media or attending protests. Unions have advised staff not to accept while they consider a legal challenge.

“This has been an incredibly tough decision for the business: to make this choice or face taking the company into administration. This would have meant the loss of 3,000 jobs and the end of P&O Ferries,” P&O said on Tuesday. 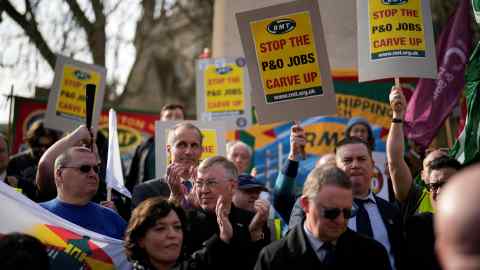 P&O and its Dubai-based owner DP World have come under intense scrutiny for refusing to enter into consultations with the unions and instead dismissing staff with no warning, many via a pre-recorded video.

It said that the media reaction had been “very negative as expected”, but that by Friday the company was no longer the top story on the BBC or trending on Twitter, and therefore management expected that “we will not stay in the spotlight for much longer”.

But P&O has instead come under continued pressure.

Ministers on Friday said P&O could have broken the law by failing to properly consult or tell the government about the mass job cutting. Business secretary Kwasi Kwarteng gave P&O a deadline of 5pm on Tuesday to explain whether its process was lawful.

P&O has sent a formal explanation to Kwarteng, according to one person familiar with the matter.

Grant Shapps, the transport secretary, on Monday raised the prospect of a consumer boycott of P&O. Meanwhile Hebblethwaite and a representative from DP World have been called to appear in front of MPs on Thursday to explain their actions.

Hello, folly! A 21st-century take on an 18th-century oddity

Saudis queue up for mortgages as kingdom kick-starts market