In comments to President Volodymyr Zelensky after the Ukrainian leader addressed the Italian parliament by video, Draghi said Rome would support Kyiv’s application to join the bloc, which it made four days after the Russian attack began.

“Today, Ukraine does not just defend itself,” said Draghi. “It defends our peace, our freedom, our security. It defends that multilateral order based on rules and rights that we have painstakingly built up since the war.”

“Italy wants Ukraine to join the EU,” he said. “I want to tell President Zelensky that Italy stands alongside Ukraine in this process.”

Draghi’s endorsement echoes demands from other mainly eastern EU members for Ukraine to be made a member, but earlier this month the bloc’s leaders collectively declined to endorse Ukraine’s application at a summit.

Draghi did not specify any timeframe for its membership drive and acknowledged that the path to EU membership was “long”. He noted that membership required reforms to ensure a “functioning integration”, but said Italy — one of the EU’s founding members — was ready to support the effort.

Russia’s president Vladimir Putin is staunchly opposed to the idea of Ukraine joining Nato, which he has said would lead to nuclear war, but he has not commented recently on its aspirations to become an EU member.

Ukraine’s bid for a rapidly approved membership plan has divided EU members and the bloc’s institutions. There is widespread unease over the idea of allowing Kyiv to bypass a long list of standards and requirements that new members must meet — on issues ranging from the rule of law to the market economy — before its candidacy is even scheduled for a vote by the EU’s 27 existing members, which would need to approve it unanimously.

When Kyiv applied for membership on February 28 it received immediate backing from several mainly eastern EU members, including Poland and the Baltic states. But others have been more cautious. A summit of EU leaders earlier this month only acknowledged Ukraine’s “European aspirations” and expressed a willingness to “further strengthen our bonds and deepen our partnership to support Ukraine in pursuing its European path”.

Ukraine’s bid also poses difficult questions over pending applications from Moldova and Georgia, which applied shortly after Ukraine, and five countries in accession talks. The EU’s newest member, Croatia, joined in 2013 a decade after it applied.

Draghi said: “When horror and violence seem to have the upper hand, it is precisely then that we must defend human and civil rights and democratic values. Ukraine has the right to be safe, free, democratic.”

Earlier, Zelensky had appealed to Italians to do everything possible to halt Russia’s devastating offensive in Ukraine. 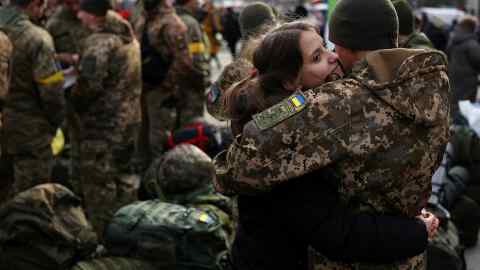 “Italian people, now is the time to do all possible to secure peace and end this war that Russia prepared for a long time. Their aim is Europe . . . destroying your values, not only ours,” Zelensky said in a video address also broadcast live on Italian television.

Italy has traditionally been one of the countries in western Europe with the closest ties to Russia. Some members of Draghi’s governing coalition have been open admirers of Putin.

However, the invasion has prompted an outpouring of Italian support for Ukrainians, while Italian authorities have moved swiftly to seize yachts and villas owned by Russian oligarchs on the EU sanctions list.

An estimated 60,000 war refugees have so far made their way to Italy, which already had one of western Europe’s largest Ukrainian communities, with about 236,000 Ukrainian migrants living and working in the country.

CDC warns of a rise in measles, other preventable diseases if...

European Super League holdouts gear up for a reboot