Ketanji Brown Jackson stressed that she will stay in her “lane” of the judicial system and not shape policy if confirmed to the US Supreme Court as she fended off critiques by Republicans of her legal record and philosophy.

“I am particularly mindful of not speaking to policy issues because I am so committed to staying in my lane of the system,” said Jackson, who was nominated by Joe Biden to fill the seat that will be vacated when Stephen Breyer steps down at the end of the current term.

“I believe that judges are not policymakers,” she added.

Jackson sought to underscore her impartiality to the Senate judiciary committee on Tuesday as hearings to vet her nomination entered their second day.

Republican and Democratic members of the committee have largely praised Jackson’s background. But Republican senators sought to raise questions over her legal career, with Lindsey Graham, a senator for South Carolina, presenting the most confrontational string of queries around Jackson’s past work linked to Guantánamo Bay, the US military base on Cuba that has hosted a prison for detainees in the aftermath of the September 11, 2001 attacks.

He criticised Jackson for her work in drafting court documents on behalf of her clients that opposed the periodic review of Guantánamo detainees and called for having them either tried or released.

“I’m just trying to understand what made you join this cause,” he said, to which Jackson responded that was not her own argument.

“When you are an attorney and you have clients who come to you, whether they pay or not, you represent their positions before the court,” she said. 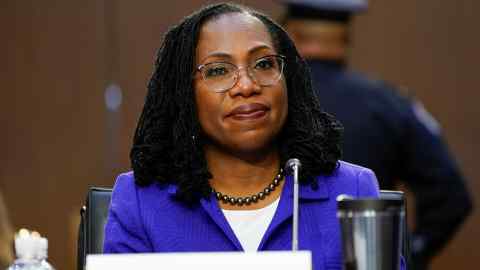 “I hope they all die in jail if they’re going to go back to kill Americans,” Graham said in reference to Guantánamo prisoners, before picking up his bottle of soda and storming off.

Durbin responded by saying the committee should not associate Jackson’s work representing Guantánamo detainees when working in a federal public defender’s office in the early 2000s “as being inconsistent with our constitutional values”.

Senators on the judiciary committee will continue to question Jackson on Tuesday and Wednesday. After the hearing concludes, the committee will vote on whether to advance her nomination to the full Senate for a final vote.

Why a working mom wants to return to the office