BuzzFeed has missed the lofty revenue predictions it pitched to Spac fund investors last year by more than 20 per cent, while the digital media group’s editor-in-chief has resigned as it looks to further shrink its newsroom.

When it agreed last June to go public in a deal with a blank cheque company, BuzzFeed told potential investors its revenue would soar to $521mn in 2021, $654mn in 2022, and $1.1bn in 2024, driven by what it called “rapid scale and monetisation with a deep understanding of virality and social”.

Special purpose acquisition vehicle 890 Fifth Avenue Partners raised $288mn ahead of its merger with BuzzFeed, but those investors pulled 94 per cent of their money out before the company went public in December.

Their caution was validated on Tuesday as BuzzFeed reported revenue for 2021 of only $398mn in its maiden annual results as a public company.

This was up from $321mn for 2020, but was boosted by two acquisitions completed last year — those of digital media companies HuffPost and Complex Networks. BuzzFeed declined to say how much additional revenue was provided by those deals.

Mark Schoofs, editor-in-chief of BuzzFeed’s news division, told staff on Tuesday morning he was leaving the company, and that BuzzFeed would offer voluntary redundancies to “accelerate the timeline to profitability”.

“That will require BuzzFeed News to once again shrink in size,” Schoofs said in an internal memo, adding that there would be a “shift in editorial focus and structure”.

BuzzFeed, known for its shareable listicles, quizzes and stunt videos, is one of a generation of digital media groups that experienced a stunning rise and fall over the past decade. Investors soured on these companies because they did not match hype with financial performance, resulting in a period of slashed valuations and lay-offs.

Founder and chief executive Jonah Peretti last year told the FT that he was focused on “financial discipline” as he set out to prove that BuzzFeed could meet its financial forecasts and grow into a sustainable, profitable company. “We’re at the start of this next stage of appreciation of valuations”, he predicted in July.

This has not panned out. Instead, BuzzFeed’s stock price halved from an initial $10 a share when it listed on the Nasdaq in December, to below $5, giving it a valuation of around $660mn.

The group reported net income of $26mn for 2021, although this profit was due to a tax benefit. Excluding this, BuzzFeed posted a net loss of $528,000 for the year. 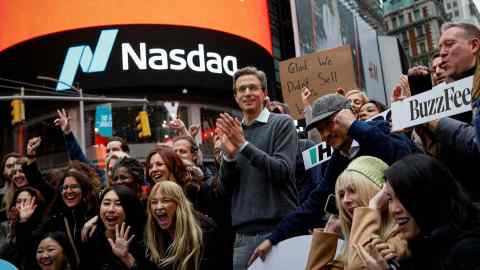 Peretti said: “We are confident in our ability to lead the industry forward as we execute against our long-term growth plans.”

The company has previously fallen short of its forecasts, missing revenue targets in 2015 and 2017.

Peretti has touted the potential of BuzzFeed’s fast-growing commerce business, through which it sells BuzzFeed-branded products ranging from spatulas to sex toys, and earns a commission for recommending other products sold online.

admin - September 26, 2022
0
Unbeknownst to buyers lining the sidewalks outside of frenzied open houses this spring, the Pandemic Housing Boom was already in its final inning....

admin - September 26, 2022
0
A coal plant in China While China is funding the radical green movement here in America, the country is doubling its fossil fuel usage...