Ukraine has rejected Russia’s ultimatum to surrender the besieged port city of Mariupol, as Moscow stepped up one of the most destructive assaults of an invasion that has already displaced 10mn civilians.

Russia’s military gave Ukraine until 5am on Monday to respond to its surrender terms for Mariupol, which demanded fighters lay down arms and warned local officials they would face “military tribunals” if they resisted.

The exchanges over the strategically important city came as Russia entered the 26th day of its invasion still struggling to take control of any of Ukraine’s biggest population centres or make significant territorial advances, particularly in the north.

The continued fighting will set the backdrop for a busy week of diplomacy in Europe, including summits for the leaders of the EU, the Nato alliance and the G7 heads of government. Joe Biden, US president, will also visit Poland on Friday, according to US officials.

Capturing Mariupol would give the Russians control of a swath of Ukraine’s southern coast along the strategically important Sea of Azov, and potentially allow Moscow to release troops tied up in the siege for other offensive operations.

Mariupol’s status is a sticking point in the peace talks between Kyiv and Moscow, because it is part of the Ukrainian-held territory claimed by Russia-backed separatists, according to two people briefed on the negotiations.

Iryna Vereshchuk, Ukraine’s deputy prime minister, dismissed Russia’s offer, saying “there can be no question of surrendering [Mariupol] and laying down weapons”. “We have already informed the Russian side about this,” she told the Ukrainska Pravda news site, as she demanded Russia open safe corridors for civilians to escape.

The port city has been laid to waste by Russian heavy weapons, with whole neighbourhoods left unrecognisable under relentless artillery fire since late February. More than 200,000 residents remain trapped, with no electricity, gas or water in sub-zero temperatures, struggling daily to find food.

Volodymyr Zelensky, the Ukrainian president, has accused Russian forces of deliberately targeting civilians in the city, including by bombing an art school on Sunday where hundreds of women, children and elderly had been taking shelter.

“People were hiding there. Hiding from shelling, from bombing. There were no military positions,” Zelensky said in the early hours of Monday. “There were about 400 civilians, mostly women and children, the elderly. They are under the debris. We don’t know how many are alive at the moment.”

Ukrainian officials said they planned to send 50 buses to evacuate more people from Mariupol, one of several efforts around the country to help civilians escape frontline areas. Zelensky added that 4,000 residents of Mariupol were evacuated to the city of Zaporizhzhia on Sunday.

Around 10mn civilians have been displaced within Ukraine since the start of the conflict, including 3.4mn who have fled the country according to the UN. More than 2mn mainly women and children have crossed the border to Poland.

Despite overwhelming evidence to the contrary, Russia has claimed Kyiv was using “Nazis”, “foreign mercenaries” and “bandits” to hold up to 130,000 civilians hostage in Mariupol. It has denied any responsibility for the civilian casualties in Mariupol and blamed them on “provocations” by Ukrainian nationalists.

An assistant to the city’s mayor, Petro Andryushchenko, told Human Rights Watch on Sunday that “that more than 3,000 civilians may have died since the fighting began”, but added that the exact number was unclear. Local authorities reported that at least 80 per cent of the city’s residential buildings were damaged or destroyed, the HRW report said.

In Mariupol, the situation “has become so dramatic, that despite unsecured corridors, people started to find their ways out of the city”, Peter Maurer, president of the International Committee of the Red Cross told the Financial Times.

Ukraine’s military reported a relative lull in Russian attacks over the weekend, noting a decrease in the number of fighter jet sorties. It claimed to be continuing counter attacks, including through air strikes on the Russian positions and supply lines.

A UK intelligence update said Russian forces driving west from Crimea towards Odesa were still attempting to circumvent Mykolayiv but had made “little progress over the past week”.

The Ministry of Defence added a naval blockade of Ukraine’s coast was “likely to exacerbate the humanitarian situation” by preventing “vital supplies” reaching the civilian population. 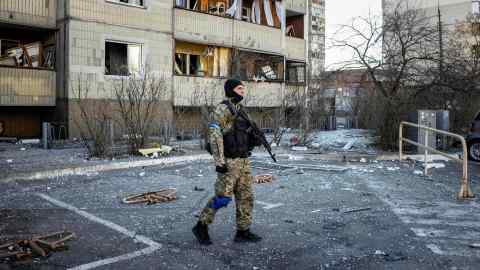 The assault on Mariupol has intensified as Russia and Ukraine continued negotiations aimed at ending the war, with Turkish officials involved in mediation claiming the two sides were edging towards a deal.

Mevlut Cavusoglu, Turkey’s foreign minister, said that “the parties are close to agreement on fundamental issues”. “It’s not that easy to negotiate while the war is ongoing, or to agree when civilians are dying. But I want to say that there is momentum,” he said.

Kyiv and its western allies fear Russia could be buying time in peace talks in a bid to replenish Moscow’s forces and launch a broader offensive.

Zelensky raised the prospect of further peace talks hosted in the city of Jerusalem, after speaking to Israel’s Knesset via video call on Sunday.

Zelensky said Israeli Prime Minister Naftali Bennett “is trying to find a way to negotiate with Russia” adding that “so that sooner or later we start talking to Russia, perhaps in Jerusalem. This is the right place to find peace. If it is possible.”