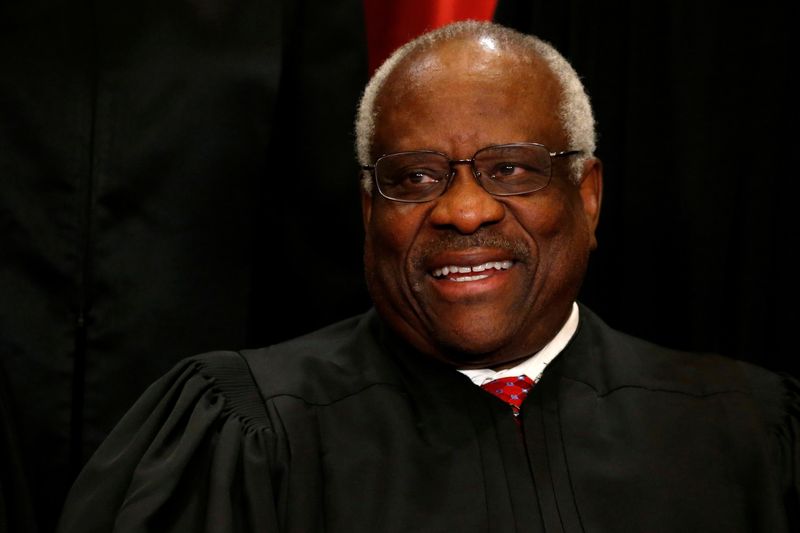 WASHINGTON (Reuters) – U.S. Supreme Court Justice Clarence Thomas was admitted to a hospital in Washington on Friday after experiencing flu-like symptoms and was diagnosed with an infection, the high court said on Sunday.

Thomas, 73, was being treated with intravenous antibiotics, his symptoms were abating, and he expected to be released from the Sibley Memorial Hospital in a day or two, the court said in a statement.

The Supreme Court, which is set to be in session on Monday, said that Thomas will participate in the consideration of cases through briefs, transcripts, and audio of the oral arguments.

The court is set to hear four cases this week.

A court representative said earlier that all nine justices were fully vaccinated against COVID-19 and had received booster doses.

A conservative and one of two Black men to have served on the Supreme Court, Thomas is the longest-serving of the current justices. The Supreme Court has a 6-3 conservative majority, including three justices appointed by President Joe Biden’s Republican predecessor Donald Trump.

Thomas was nominated by President George H.W. Bush in 1991 to fill the Supreme Court vacancy created by the retirement of liberal justice Thurgood Marshall, the first Black justice on the court.

Separately on Monday, hearings will begin for federal appellate judge Ketanji Brown Jackson, Biden’s nominee, to become the first Black woman to serve on the Supreme Court. Biden has tapped her to replace Stephen Breyer, 83, who is retiring and is the oldest justice on the current court.

Thomas spoke on March 11 in Utah and raised concerns about calls to add additional members to the court, and discussed how the COVID-19 pandemic prompted the court to conduct arguments remotely.

“I didn’t like the free-for-all in oral arguments where we interacted and interrupted each other. It’s more productive now. The arguments are contributing to the process of deciding the case as opposed to what was happening, which was almost like a catfight,” Thomas said, according to the Salt Lake Tribune.

You can now get Ethereum and Dogecoin at your local grocery...

Small business cut backs could be a recession signal