P&O Ferries faced a barrage of political criticism on Monday as it was unable to confirm when it would restart sailings across the English Channel and the transport minister raised the prospect of a consumer and industry boycott.

Politicians from all parties lined up to rebuke P&O during a parliamentary debate, after the company suspended sailings to sack 800 UK-based crew with no notice on Thursday.

Grant Shapps, UK transport secretary, said: “I expect many customers, passengers and freight will quite frankly wish to vote with their feet and where possible choose another operator.”

P&O has indicated it hopes to resume operations on its suspended routes this week, but has not given a clear timetable. Sailings between Liverpool and Dublin, which use unaffected crews, restarted at the weekend.

Shapps said rival Stena Line would put on extra ferries between Scotland and Northern Ireland from Tuesday to help retailers including Asda and Marks and Spencer resupply.

Ministers have faced questions from trade unions and MPs over whether they were pre-warned about the sackings. 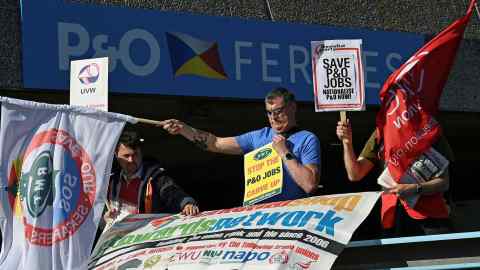 Shapps admitted on Monday that he did know last Wednesday evening that P&O was poised to fire staff — at least 12 hours before the company made its announcement.

The comments suggest a new version of the narrative of how ministers found out about P&O’s plans.

Last Friday officials from the Department for Transport and Downing Street insisted that only civil servants knew on Wednesday night about the job cuts — with ministers finding out on Thursday morning.

The memo, seen by the FT, said the sackings “ensure that [P&O] will remain a key player in the UK market for years to come through restructuring”.

Shapps told the Commons it was only on Thursday morning that he found out the company was making immediate redundancies via a pre-recorded web call.

He said he had expected the sackings to be preceded by a proper consultation, as has happened with previous job losses in 2020 and in 2021.

Ministers are also facing questions over whether UK employment laws are strong enough.

The TUC argued that P&O was exploiting the same weaknesses in British law that allowed many employers during the pandemic to force staff to accept worse terms and conditions or risk losing jobs.

Tim Sharp, senior policy officer at the union body, said reforms were needed to give workers stronger protection against unfair dismissal and stop employers being able to simply cite business concerns as a justification to downgrade terms and conditions.

The government has repeatedly blocked opposition attempts to legislate along these lines.

The RMT transport union has also accused the government of failing to act on legislation that would have protected P&O’s workers against quirks in maritime law that could allow the company to replace UK workers with staff hired overseas on much lower wages.

Unions have claimed that the new agency staff brought in to crew P&O Ferries’ ships will be paid as little as £1.80 an hour, although the company is understood to dispute the figures. It has not disclosed any details about pay.

In 2020, the UK legislated to extend the statutory minimum wage to all seafarers working on domestic ferry or cargo routes between UK ports — regardless of nationality or where the vessel was registered.

Ferries operating between the UK and the rest of Europe were excluded, however. Operators on North Sea routes, in particular, had said their services would not be viable with higher costs.

admin - December 8, 2022
0
And since his Twitter takeover he’s repeatedly ordered its employees into the office, including using his first company-wide email to say he must...

admin - December 8, 2022
0
At oral argument in the recent affirmative action cases, attorneys for the defendants argued that although they do ask applicants to check a...