If you want to see nesting season at its showiest, a heronry is the place to go. Northern Europe’s grey heron and its American cousin the great blue heron have wingspans of about 6ft. Their nests are shambolic affairs. And their downy chicks resemble Muppet pterodactyls of a kind Jim Henson might have designed in a moment of anarchic genius.

The heronry in my local park isn’t large. But mating pairs have still occupied all 11 nest sites in thickets on an island in the lake. There is always something happening there. Adults may be reprising courtship rituals that were at fuller pitch in January, popping up their Cruella de Vil quiffs and presenting gifts to mates (“Darling! Another twig? How thoughtful!”). Others will be flying in to feed chicks, who immediately monster their parents with begging calls that sound like two shovels clanking together. Larger youngsters are venturing on to nest edges to flap their wings.

Heronries are landmarks to the birth of modern conservation as well as natural entertainment. Remarkable women on either side of the Atlantic got the party started with campaigns against trading in wild bird plumage, particularly egret and heron feathers. Their starting point was that a hat with bits of dead bird stuck to it was quite frankly unbecoming.

Their deeper message was that people have a duty of care towards nature which precludes slaughtering wild animals for decorations or specimen collections. That view, now widespread, was radical at the time. The feather trade was responsible for the deaths of about 200mn wild birds annually at its peak. “People thought nature was endless,” says Tessa Boase, whose book on the splendidly named conservationist Etta Lemon chronicles the early years of what became the Royal Society for the Protection of Birds.

Emily Williamson co-founded this in Manchester in 1889 after the British Ornithologists Union turned down her membership application because she was female. Its greatest publicity coup under the vigorous Lemon was to parade photos of an egret colony devastated by hunters on sandwich boards through London. A membership of some 1mn now makes the RSPB the UK’s largest conservation body.

Harriet Hemenway and Minna Hall separately set up the forerunner of America’s Audubon Society to pursue parallel aims in Boston in 1896. The name honours the pioneering ornithologist whose great tome The Birds of America beautifully depicts the commodity the fuss was about. These were the spectacular breeding plumes of birds like the great blue heron, great egret and snowy egret. 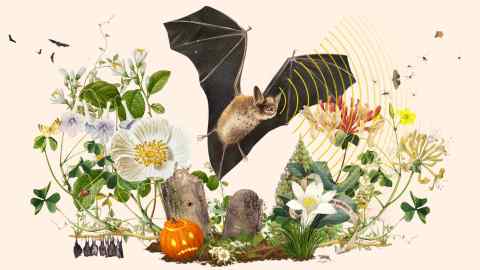 Climate change means egret species are moving north in the US and in Europe, according to Jim Kushlan of HeronConservation. Little egrets have been nesting in the UK since 1996. They often build colonies in the same trees as herons, but lower down. There are pros and cons. The sword-like beaks of herons provide fearsome protection against such nest robbers as crows and magpies. But nesting herons also shower guano on everything below.

Egrets now visit some of the same garden ponds as herons — a cue for me to intrude into your private sorrow if you have ever optimistically emerged from an aquarist shop clutching a bag of fancy goldfish. As far as your local herons were concerned, you were just the Uber Eats delivery driver.

These birds catch fish. They have had 55mn years of evolution to get good at it. Ever the peacemaker, I was hoping my research would show that herons feed far more on wild fish than ornamental ones. But when I asked veteran Lea Valley ornithologist Paul Roper what prey startled chicks regurgitate when he’s ringing them, he replied cheerfully: “It’s mostly goldfish.”

Herons were a menu item themselves at royal Tudor banquets. These days, killing herons is illegal. Even so, the Tory MP Alan Clark described doing so in his scabrous diaries and, scoundrel though he was, it reduced him to tears. Keeping them off garden ponds is difficult. They can stab their beaks through netting. They have been seen perching insouciantly on plastic decoys intended to scare them away.

But Rob Whitell of the British Koi Keepers Society tells me his members complain very little about herons eating their expensive decorative carp. “We take vulnerabilities out when we design a pond,” he says. Koi pools are often surrounded by low walls topped with acrylic panels herons are wary of perching on. Erecting pergolas nearby makes it hard for the birds to land and take off.

Without recommending it, Whitell reports that nervous fish keepers can buy a device which is meant to squirt herons with water when they break a light beam. I know that if I installed one, the only organism in the garden it would ever squirt would be me.

Besides, the herons are welcome to the few remaining sticklebacks in my wildlife pond. I relish occasional early morning sightings of these prehistoric-looking birds. They have survived hungry Tudor royals. They have survived Victorian milliners. They even survived Alan Clark MP. They will survive our own generation too, if we heed the message of Williamson, Lemon, Hemenway and Hall.

Jonathan Guthrie is head of Lex

USA Today Whines That Journalists Are Stressed and Carry Trauma on Their Souls Trying...

admin - November 28, 2022
0
A column written by USA Today editor-in-chief Nicole Carroll discusses the stress and ‘trauma’ experienced by journalists in trying to report news to...

How a UK council is driving a retail revival in a...