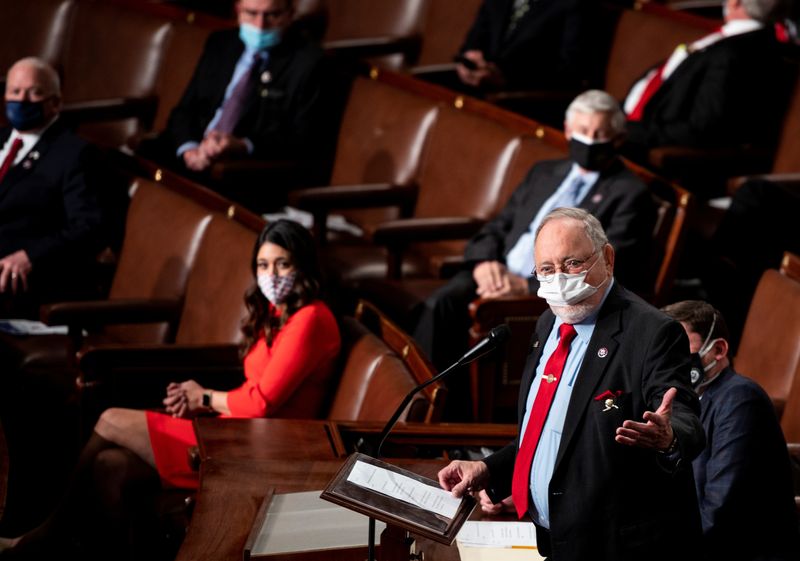 WASHINGTON (Reuters) -U.S. Republican Representative Don Young, who was first elected to Congress in 1973 and was its longest-serving current member, died on Friday, his office said in a statement.

The 88-year-old congressman died while traveling home to Alaska, his office said.

“Don Young’s legacy as a fighter for the state will live on, as will his fundamental goodness and honor. We will miss him dearly,” the statement said.

His office did not give the cause of death. The Anchorage Daily News reported that Young lost consciousness on a flight from Los Angeles to Seattle and could not be resuscitated. The newspaper report cited Jack Ferguson, who had served as Young’s chief of staff.

Young was Alaska’s only member in the House of Representatives. The longest-serving member of the current U.S. Congress, according to his website, he represented Alaska for 25 terms and last year he filed to enter this November’s election.

“I’m incredibly saddened to hear of the passing of Don Young,” U.S. Representative Steve Scalise, the No. 2 Republican in the House, said in a statement.

“He was a passionate champion of his home state of Alaska, but he was also a mentor who, as the Dean of the House, had more institutional knowledge of Congress than anyone I know,” Scalise said.

U.S. Representative Dean Phillips, a Democrat from Minnesota, said on Twitter (NYSE:): “His fiercely independent voice for Alaska and one of a kind wit and character will be missed.”

Young was born in California in 1933 and moved to Alaska in 1959, shortly after statehood.

In Congress, he was known for directing billions of dollars of federal money to Alaska, the largest state in the country but with one of the smallest populations.

In late 2020, Young was diagnosed with COVID-19 after he had earlier ridiculed the disease as a “beer virus.”

Bed Bath & Beyond names Laura Crossen as its interim CFO...

Uber sued by 550 women over allegations including kidnapping, rape and...