At first it seemed like snow. Tiny, twisting, drifting flakes beginning to fall. But the sky was blue.

Lubov Burra, 73, was clutching her handbag and looking up at her flat on the 11th floor. “It is the one with the balcony. It is on fire,” she said calmly as her possessions, and those of her friends and neighbours, were turned to ash now falling gently around them.

In Kyiv’s western Sviatoshynskyi district, Burra’s block was hit by a Russian missile before dawn on Tuesday. It was one of four civilian targets that morning. She said “everything” she owned was gone. All she had left was in her handbag: her documents, her phone and her diabetes medicine.

“I have been here from the beginning,” Burra said. She had moved to the newly built block in 1975. Her children and grandchild had played in front of it. Neighbours gathered to clean up around the buildings of the estate on Saturday. They drank morning coffee together and had planted trees here together too.

On Tuesday the entire block, which had been home to up to 300 people, was destroyed.

As it burned, sunlight glanced off the mist from a jet of water from fire hoses, creating a bright, strong rainbow over piles of smouldering debris.

Ever since the beginning of the Russian invasion on February 24, Ukraine’s capital has been mostly spared the attacks that have reduced parts of suburban towns around Kyiv and elsewhere to ruins. But the recent attacks seem to indicate that the capital’s comparative respite could be coming to an end.

From Tuesday evening residents of Kyiv were ordered to stay indoors for a 35-hour curfew. Kira Rudyk, a member of Ukraine’s parliament, said intelligence reports had suggested that the capital was about to be subjected to a major attack.

By Thursday morning it had still not come, but one person died when an intercepted missile fell on the roof of a building among the vast high-rise estates of Pozniaky district.

It was unclear whether the Russian aim is to sow panic or whether its missiles had missed their intended military targets. If the idea was to terrorise Kyiv’s people and to push its government to surrender it has not worked.

No one knows how many of Kyiv’s prewar population of about 3mn remain but residents of the blocks that had been hit said they thought only half of the usual number of residents were still at home. Above all, women and children have left the city.

Electricity, gas, water and internet all continue to function. None of these is still working in nearby suburban towns such as Irpin and Bucha where there is fighting. Bucha is Russian-occupied but if they break through and conquer Irpin they will finally have reached Kyiv’s city limits.

Exactly three weeks after the beginning of the war, though, they have not. Morale on the Ukrainian side remains high. There is no mood for compromise, said Rudyk. Even if the Russians did break through they did not have enough troops to occupy the city, she added.

Smoke trails from surface-to-air missiles indicate that the city’s air defence system is working. Several of the recent explosions in Kyiv have been attributed to Ukrainian interceptions of Russian missiles. It may explain why Kyiv has not yet been subjected to the missile barrages that have flattened parts of Mariupol and Kharkiv.

In the meantime, the capital’s residents are adapting. Many supermarkets remain open, if depleted. Pharmacies have run out of certain medicines. Some trains still run to the west of the country, to Odesa, and the main road south out of the city remains open. The Russian pincer movement advance from the north-west and north-east has stalled.

This week’s attacks on residential areas, intentional or not, may herald the beginning of a final Russian push to capture Kyiv but while waiting to find out, some of the capital’s residents have other things to worry about: they are running out of money.

Hearing English spoken, a woman with perfect English stopped and said that as she had no more money for food, would it be possible to give her some?

Many businesses have ceased normal operations and, with no income, will not be able to pay their employees. A few companies have begun to reopen, though, adapting to wartime demands.

On Monday a missile exploded opposite Kurenivskyi Park in the north of the city. CCTV footage showed a person walking along the pavement at the moment of impact. An hour later the body was still waiting to be collected, but a crew from the electricity company was already fixing severed cables that hung across the street. 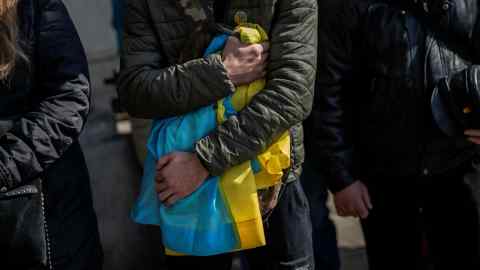 Across the park, Yaroslav Barsuk, the deputy director of Pasta Factory Kyiv, was fixing plywood boards to cover up the areas where the glass of the company’s entrance had been shattered.

The 33-year-old Barsuk said the company used to produce 3,000 tonnes of pasta a month but had stopped when the war started. They had been due to restart production that day — but much of the workforce had either fled or could not get to work because of fighting or the lack of public transport. Now the company expected to be able to produce only 500 tonnes a month.

Across town Sprut Salon, a hipster hairdresser whose name means Octopus, has reopened. According to Yarolsav Rudakov, the 27-year-old proprietor, it was doing more cuts now than before the war, though customers’ lack of money meant that his prices had had to go down. Some of his hairdressers had left to fight but others whose salons had closed had come to work for him.

Sprut Salon’s contribution to the war effort was free haircuts for those bearing arms, Rudakov said. Soldiers “don’t want to worry about their hair right now, so they ask for buzz cuts”, he noted matter of factly.

It could be that buzz cuts remain de rigueur for the foreseeable future. Despite optimistic talk of a possible deal to end the war Rudyk, the MP, was sceptical.

Ukrainians are determined to fight, she said. If they are told that the price of peace is to make unpalatable concessions, “I don’t think that will fly”.

Back in Sviatoshynskyi district, Ludmila Kyzeytsova was sitting on a bench just past a body zipped in a black bag. The 70-year-old had just been rescued from her flat by firefighters with a giant ladder. She managed to save one plastic bag of clothes.

Kyzeytsova might once have been sympathetic to Russia’s president Vladimir Putin, who has made much of his belief that Ukrainians and Russians are really one people.

But what was happening to her city was incomprehensible. After all, she said, together “we are one big Slavic nation”.

Now, she said, “Putin must answer for his crimes”, adding: “[US president Joe] Biden must help Ukraine and crush him, thank you very much!”

admin - February 8, 2023
0
Join Our Telegram channel to stay up to date on breaking news coverage The Casper blockchain project implements a unique “correct-by-construction” mechanism to solve...